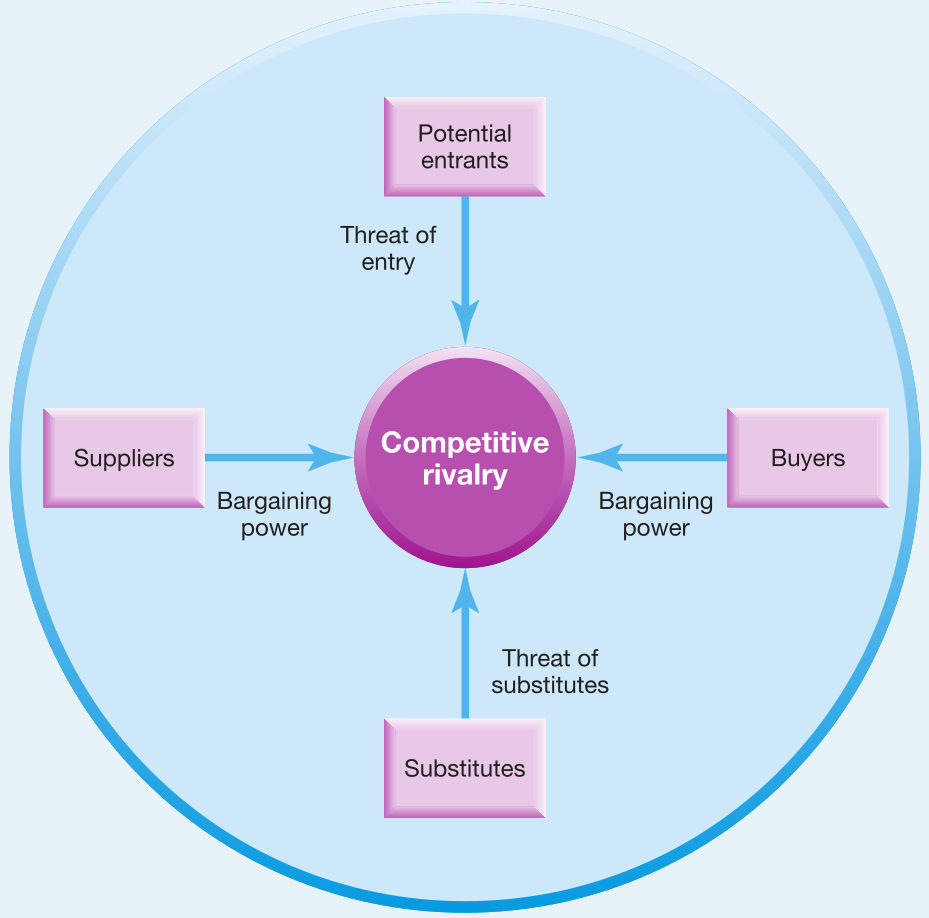 The threat of entry

How easy it is to enter the industry obviously influences the degree of competition. Threat of entry depends on the extent and height of barriers to entry.
Barriers are the factors that need to be overcome by new entrants if they are to compete successfully. High barriers to entry are good for incumbents (existing competitors), because they protect them from new competitors coming in.
Typical barriers are as follows:
● Scale and experience. In some industries, economies of scale are extremely important: for example, in the production of automobiles or the advertising of fast-moving consumer goods. Once incumbents have reached large-scale production, it will be very expensive for new entrants to match them and until they reach a similar volume they will have higher unit costs. This scale effect is accentuated where there are high investment requirements for entry, for example research costs in pharmaceuticals or capital equipment costs in automobiles. Barriers to entry also come from experience curve effects that give incumbents a cost advantage because they have learnt how to do things more efficiently than an inexperienced new entrant could possibly do. Until the new entrant has built up equivalent experience over time, it will tend to produce at higher cost. Of course, changing ‘business models’ can alter scale effects or make certain kinds of experience redundant. For example, Internet banking requires only 10,000 customers to be viable (particularly if they are from a profitable niche) and makes experience in running branches much less important.
● Access to supply or distribution channels. In many industries manufacturers have had control over supply and/or distribution channels. Sometimes this has been through direct ownership (vertical integration), sometimes just through customer or supplier loyalty. In some industries this barrier has been overcome by new entrants who have bypassed retail distributors and sold directly to consumers through e-commerce (for example, Dell Computers and Amazon).
● Expected retaliation. If an organisation considering entering an industry believes that the retaliation of an existing firm will be so great as to prevent entry, or mean that entry would be too costly, this is also a barrier. Retaliation could take the form of a price war or a marketing blitz. Just the knowledge that incumbents are prepared to retaliate is often sufficiently discouraging to act as a barrier. This dynamic interaction between incumbents and potential new entrants will be discussed more fully in section 2.3.2 In global markets this retaliation can take place at many different ‘points’ or locations.
● Legislation or government action. Legal restraints on new entry vary from patent protection (for example, pharmaceuticals), to regulation of markets (for example, pension selling), through to direct government action (for example, tariffs). Of course, organisations are vulnerable to new entrants if governments remove such protection, as has happened with deregulation of the airline industry.
● Differentiation. Differentiation means providing a product or service with higher perceived value than the competition. Cars are differentiated, for example, by quality and branding. Steel, by contrast, is by and large a commodity, undifferentiated and therefore sold by the tonne. Steel buyers will simply buy the cheapest. Differentiation reduces the threat of entry because it increases customer loyalty.

The threat of substitutes

Substitutes are products or services that offer a similar benefit to an industry’s products or services, but by a different process. For example, aluminium is a substitute for steel in automobiles; trains are a substitute for cars; films and theatre are substitutes for each other. Managers often focus on their competitors in their own industry, and neglect the threat posed by substitutes. Substitutes can reduce demand for a particular ‘class’ of products as customers switch to alternatives – even to the extent that this class of products or services becomes obsolete. However, there does not have to be much actual switching for the substitute threat to have an effect. The simple risk of substitution puts a cap on the prices that can be charged in an industry. Thus, although Eurostar has no direct competitors in terms of train services from Paris to London, the prices it can charge are ultimately limited by the cost of flights between the two cities.
There are two important points to bear in mind about substitutes:
● The price/performance ratio is critical to substitution threats. A substitute is still an effective threat even if more expensive, so long as it offers performance advantages that customers value. Thus aluminium is more expensive than steel, but its relative lightness and its resistance to corrosion give it an advantage in some automobile manufacturing applications. It is the ratio of price to performance that matters, rather than simple price.
● Extra-industry effects are the core of the substitution concept. Substitutes come from outside the incumbents’ industry and should not be confused with competitors’ threats from within the industry. The value of the substitution concept is to force managers to look outside their own industry to consider more distant threats and constraints. The more threats of substitution there are, the less attractive the industry is likely to be.

The power of buyers

Customers, of course, are essential for the survival of any business. But sometimes customers – here buyers – can have such high bargaining power that their suppliers are hard pressed to make any profits at all.
Buyer power is likely to be high when some of the following conditions prevail:
● Concentrated buyers. Where a few large customers account for the majority of sales, buyer power is increased. This is the case on items such as milk in the grocery sector in many European countries, where just a few retailers dominate the market. If a product or service accounts for a high percentage of the buyers’ total purchases their power is also likely to increase as they are more likely to ‘shop around’ to get the best price and therefore ‘squeeze’ suppliers than they would for more trivial purchases.
● Low switching costs. Where buyers can easily switch between one supplier or another, they have a strong negotiating position and can squeeze suppliers who are desperate for their business. Switching costs are typically low for weakly differentiated commodities such as steel.
● Buyer competition threat. If the buyer has some facilities to supply itself, or if it has the possibility of acquiring such facilities, it tends to be powerful. In negotiation with its suppliers, it can raise the threat of doing the suppliers’ job themselves. This is called backward vertical integration, moving back to sources of supply, and might occur if satisfactory prices or quality from suppliers cannot be obtained. For example, glass manufacturers have lost power against their buyers as some large window manufacturers have decided to produce some of their own glass.
It is very important that buyers are distinguished from ultimate consumers. Thus for companies like Nestlé or Unilever, their buyers are retailers such as Carrefour or Tesco, not ordinary consumers (see discussion of the ‘strategic customer’ in section 2.4.3). Carrefour and Tesco have much more negotiating
power than an ordinary consumer would have. The high buying power of such supermarkets has become a major source of pressure for the companies supplying them.

The power of suppliers

Suppliers are those who supply the organisation with what it needs to produce the product or service. As well as fuel, raw materials and equipment, this can include labour and sources of finance. The factors increasing supplier power are the converse to those for buyer power. Thus supplier power is likely to be high where there are:
● Concentrated suppliers. Where just a few producers dominate supply, suppliers have more power over buyers. The iron ore industry is now concentrated in the hands of three main producers, leaving the steel companies, relatively fragmented, in a very weak negotiating position for this essential raw material.
● High switching cost. If it is expensive or disruptive to move from one supplier to another, then the buyer becomes relatively dependent and correspondingly weak. Microsoft is a powerful supplier because of the high switching costs of moving from one operating system to another. Buyers are prepared to pay a premium to avoid the trouble, and Microsoft knows it.
● Supplier competition threat. Suppliers have increased power where they are able to cut out buyers who are acting as intermediaries. Thus airlines have been able to negotiate tough contracts with travel agencies as the rise of online booking has allowed them to create a direct route to customers. This is called forward vertical integration, moving up closer to the ultimate customer. Most organisations have many suppliers, so it is necessary to concentrate the analysis on the most important ones or types. If their power is high, suppliers can capture all their buyers’ own potential profits simply by raising their prices. Star football players have succeeded in raising their rewards to astronomical levels, while even the leading football clubs – their ‘buyers’ – struggle to make money.

These wider competitive forces (the four arrows in the model) all impinge on the direct competitive rivalry between an organisation and its most immediate rivals. Thus low barriers to entry increase the number of rivals; powerful buyers with low switching costs force their suppliers to high rivalry in order to offer the best deals. The more competitive rivalry there is, the worse it is for incumbents within the industry.
Competitive rivals are organisations with similar products and services aimed Competitive rivals are organisations with similar at the same customer group (that is, not substitutes). In the European transport products and services industry, Air France and British Airways are rivals; trains are a substitute. As aimed at the same well as the influence of the four previous forces, there are a number of additional customer group factors directly affecting the degree of competitive rivalry in an industry or sector:
● Competitor balance. Where competitors are of roughly equal size there is the danger of intense competition as one competitor attempts to gain dominance over others. Conversely, less rivalrous industries tend to have one or two dominant organisations, with the smaller players reluctant to challenge the larger ones directly (for example, by focusing on niches to avoid the ‘attention’ of the dominant companies).
● Industry growth rate. In situations of strong growth, an organisation can grow with the market, but in situations of low growth or decline, any growth is likely to be at the expense of a rival, and meet with fierce resistance. Low-growth markets are therefore often associated with price competition and low profitability. The industry life cycle influences growth rates, and hence competitive conditions: see section 2.3.2.
● High fixed costs. Industries with high fixed costs, perhaps because they require high investments in capital equipment or initial research, tend to be highly rivalrous. Companies will seek to reduce unit costs by increasing their volumes: to do so, they typically cut their prices, prompting competitors to do the same and thereby triggering price wars in which everyone in the industry suffers. Similarly, if extra capacity can only be added in large increments (as in many manufacturing sectors, for example a chemical or glass factory), the competitor making such an addition is likely to create short-term overcapacity in the industry, leading to increased competition to use capacity.
● High exit barriers. The existence of high barriers to exit – in other words, closure or disinvestment – tends to increase rivalry, especially in declining industries. Excess capacity persists and consequently incumbents fight to maintain market share. Exit barriers might be high for a variety of reasons: for example, high redundancy costs or high investment in specific assets such as plant and equipment that others would not buy.
● Low differentiation. In a commodity market, where products or services are poorly differentiated, rivalry is increased because there is little to stop customers switching between competitors and the only way to compete is on price.